“Our unfolding role in becoming an anti-racist congregation.” 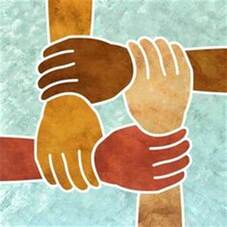 This May 25 marks the second anniversary of George Floyd’s death at the hands of Minneapolis police officer Derek Chauvin. His murder triggered a series of protests across the nation and around the world and spurred a widespread grappling with systemic racism, white privilege and white supremacy. Within an extraordinarily short space of time, we saw symbols of the confederacy and slavery being removed from the public sphere and white people reading, studying and acting to better understand the systems that had been built into the fabric of this country to maintain white privilege and make it harder for people of color to live with full privilege and equality.

As a result of George Floyd’s murder Christ the King led a series of book discussions focusing on race in
America and formed the Racial Justice Working Group. To that end, the group continues to seek ways to
lift up learning, building relationship and acting to ensure racial equality and justice not only within our
congregation and among each other but also to reach out into our community of New Brighton.

While we seek to become more aware and active, we also realize that there is more discord and division in our country with regard to racial diversity, inclusion and equity. Accusations swirl around the 1619 Project and Critical Race Theory, while there is increased scrutiny and hostility toward school boards and the teaching of history including the history of the genocide of indigenous peoples and the ramifications of slavery in the building of this country.

And with the horrific shooting in Buffalo, NY on May 14, we began to learn a new conspiracy theory, the Great Replacement Theory which says “that nonwhite individuals are being brought into the United Sates and other Western countries to “replace” white voters to achieve a political agenda” (www.NPR.org, “What is the “great replacement” and how is it tied to the Buffalo shooting suspect?
May 16, 2022).